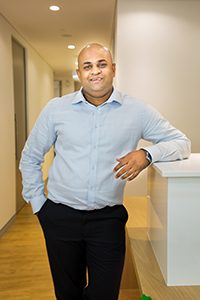 Prashanth attained his Master’s degree in Dental Surgery from The University of Hong Kong in 2007, following this up with  an advanced diploma in Paediatric Dentistry  in 2008.

In 2010, he was inducted as a member of The Royal Australasian College of Dental Surgeons and a fellow of The Royal College of Surgeons of Edinburgh in 2014. His research and clinical expertise  has seen him routinely lecture in Australia, the United Kingdom, Germany, and India. Prashanth is endorsed by the Australian Dental Association and runs  a sought after, biannual  training program for general dentists with a special interest in Paediatric dentistry.

Prashanth practiced as a specialist at Sydney Dental Hospital and was  an honorary clinical lecturer for undergraduate and postgraduate students at the University of Sydney from 2010-2013. Prashanth currently practices in Pymble on Sydney’s North Shore and Tamworth. He is a visiting dental specialist for the Hunter New England local health district and the current  Secretary for Australia New Zealand Society of Paediatric Dentistry, NSW branch (ANZSPD, NSW).

Prashanth is a proud father to Diya and Tarun who keep him very busy outside of work. Prashanth is a keen follower of sport and has represented Gerringong Cricket Club and played Grade III cricket. He is an opening batsman and has 3, 50+ scores to his credit.